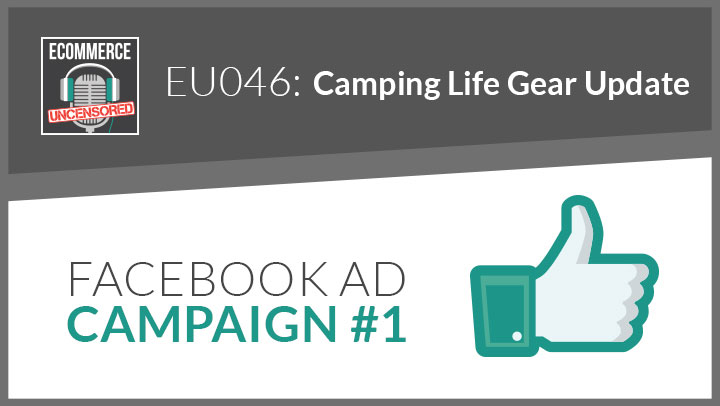 In Episode 46 of eCommerce Uncensored Kevin and Jason give you an update on the eCommerce store they created, CampingLifeGear.com and how the ad campaign worked. To get more info about the hows and whys of the store check out Episodes 40, 42 & 44. But as a quick recap the guys decided to dropship a waterproof, battery powered tent light and use a ‘free plus shipping’ offer for the ad campaign. This tent light was already selling on Facebook so the guys choose it knowing that there was already an audience out there for the product. Their job was to get the right message in front of the right audience – and the Facebook Pixel is the key ingredient to that.

The Facebook Pixel takes the ninja work out of finding your target audience because it is so smart and always learning. Using the Facebook Pixel you can start by targeting a broad audience and it will narrow and adjust your audience based on the custom goals that you give it (ex: clicks vs conversions). The challenge now becomes being patient. Running a new ad for 1 day isn’t enough anymore. Facebook is optimizing and learning and you need to give it some time to do its job. That can sometimes be a hard pill to swallow, especially for a new business spending money on Facebook ads – but you need to give Facebook some time to learn.

The first ad the guys created was optimized to get clicks. The guys wanted to get as many people as possible to their landing page. Facebook’s job here was to find the people who are most likely to click on the ad. The first ad itself was a simple, single image ad. The lead wording said “Back in Stock” to create a sense of urgency and that was followed by some info about the product. The guys used Ad Espresso (mentioned in Episode 32) to create several versions of the same ad. Ad Espresso easily links right into your Facebook ads and is perfect when you’re looking to find and test your market.

After getting a lot of inexpensive clicks to the landing page, the guys created a new campaign optimized for conversions. This time the Pixel’s job was to look for people who were likely to buy the product. After running a few variations and targeting different subsets of the audience, one ad was working better than the others. So Kevin turned off the other two ads and doubled the budget of the ad working best. The result? Everything stopped.

Doubling the budget and scaling too quickly doesn’t work. A rapid change seems to mess up the Facebook algorithm and work against you. You need to scale slowly to allow Facebook time to adjust the distribution of your ads. Lesson learned.

The next step is to create a video ad and attract more customers, when the product arrives…30 days later and it’s not there yet. Any day now…

Hopefully listening to this process helps you with building and growing your own eCommerce business.

Don’t forget to please leave a comment below or review us on iTunes or Stitcher.

You can also check out the video of this podcast and see our beautiful faces on our YouTube channel. Click here to check that out and subscribe.